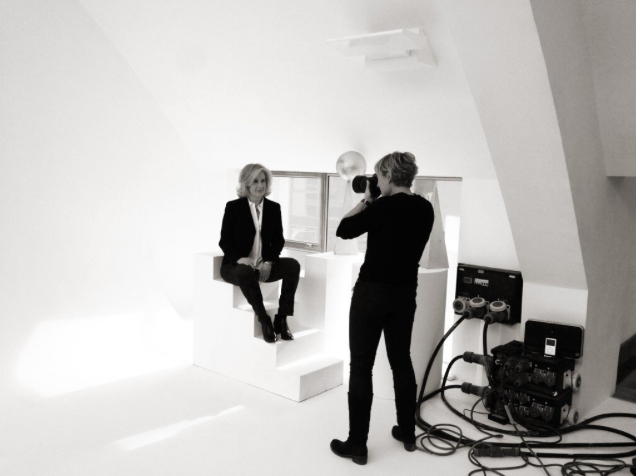 Ben Wright was born and grew up in the Sussex and is the daughter of talented amateur artist Janet Wright. From a very early age Wright loved to draw and she was given her first camera, her mother’s medium format Mamiya, at the age of eight.

Wright has established herself as a leading photographer over two decades, having first studied for a Foundation Course in Fine Art and then Photography at the West Sussex School of Art, before going on to win a place on the prestigious photography course at Bournemouth University. A month following graduation from the Post Grad course at Bournemouth, she went to London and accepted her first photographic commission for The Mail on Sunday’s YOU magazine.

Wright has become known for her exceptional portraiture. Her lens has captured world-class musicians, classical ensembles, Formula 1 drivers, emerging talent, as well as many established actors, politicians and well-known personalities – to create a star-studded portfolio of outstanding work.

Wright’s editorial work also includes shooting collections for some of the top fashion designers and she has shot many cover images for artists in the music industry. Wright also shoots extensively for commercial advertising campaigns and in particular for the automotive industry. Her work has included landmark campaigns for Allianz, Toyota, Lloyds TSB and Oxfam.

Wright is a versatile, relaxed photographer and is very adaptable, shooting both in studio and on location worldwide, in all weathers – from the freezing temperatures of the Artic to the blistering desert heat of war zones.

Wright is based in Gloucestershire and London, where she lives with her black Labradors and cat Ted, enjoying outdoor life, beautiful landscapes and country pursuits.

Current and previous clients include…

I was given my first camera when I was eight years old.

It was a 1950’s Mamiya 6, a medium format with a rangefinder. I never thought I would end up being a photographer as taking photos was just something I did and really enjoyed. I didn’t realise back then that photography was something I could do as a career. I sometimes feel fate just pushed me in the right direction to do the thing I was best at. At my interview for Bournemouth University, I was asked about what I photographed and why. Strangely, it was the first time I had been asked anything like that and the first time that I really started to think about it.

When I left Bournemouth University I did my first shoot for YOU magazine a month after finishing. I think naivety played a big part; I just thought, “My pictures are good enough, I’d like to work for them”. And I did.

Most of my work is portraiture, although I do love shooting cars and still life too. I think most of my portraits have a stillness to them and an elegant formality. This partly comes from my love of classic portraiture in painting, particularly classic Dutch art, which has a big influence on my composition and lighting. I’m probably a frustrated painter at heart, but photographers paint with light and chemicals: it’s just a different medium. I believe most portraits have as much of the photographer as the sitter in them. The portrait is my view of them. I love the invisible line between me, my camera and the subject: when it’s all working, it’s pulled taut.

Photography has allowed me to meet people and experience places I would otherwise never have seen. My job is a fantastic licence to be nosy in other people’s lives, be they famous or ‘ordinary’, all helping to inform the images I take.

One of the best pieces of advice I was given early on was, “Ideas that stay in the head, die in the head”. You do the best work when you do what you want, in your own way.

I just love having a camera in my hands. After 20 odd years of working I still wake up and think how fortunate I am to have found what I love doing, to be good at it and to get paid for doing it, and long may it continue…